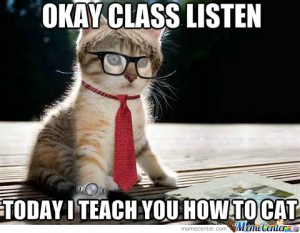 “Potty training” or “housebreaking” cats is something of a misnomer. In most cases, you don’t really need to toilet train a house cat because the cat’s instincts along with training from their mothers lead them to choose only one place for their elimination needs.

If an indoor kitten is shown that the litter box is the appropriate bathroom area in the house, she’ll use that area and only that area. Of course, certain problems can interfere with the natural order of things and there may be times you need to help your kitty learn to keep her “business” in the box.

The kittens then learn to pee on the bedding in the kittening box and may continue to wet on your bedding or furniture when they’re older. And naturally, orphaned kittens need a little help from humans to understand what the litter box is all about. In these cases, the process for potty training kittens is similar to the process for adult cats.

One thing to avoid is placing the kitten in the litter box, grasping her paw and using it to dig in the litter as if to show her how. It may be a common practice and it doesn’t hurt the kitten, but it can backfire.

Few cats enjoy being manhandled and pushed around and that includes kittens. You holding the kitten’s paw while she’s in the litter box can leave her with a bad feeling about the box. Do it often enough and she may decide she’d rather not go anywhere near the box, so that no one grabs her paw again.

Several things can lead older cats to avoid the litter box. A cat who grew up outdoors may have never had a litter box. If the cat’s been suffering from a long-term health condition that interfered with his natural urination behavior, he may keep up his old habit of wetting in the wrong habit even once he’s healthy again. This can also happen when something about the litter box has been putting the cat off for a long time, so that he fell out of the habit of using it.

To start potty training your adult cat, keep him restricted to one or two rooms for a few days and notice when he usually does does his business. This is usually after eating or waking up.

Around these times, when you think the cat might need to “go,” carry kitty to the litter box and gently place him beside the box, but not in it. Speak in soft, comforting tones and pet him so he builds good associations with the litter box. Cats learn through positive reinforcement like this. That’s why punishing cats doesn’t work, but giving treats does. Use the litter scoop to dig around in the litter a bit and give kitty the idea. If he has to go, he’ll get your point.

Factoring in the Litter Box

Keep in mind that if there’s something the cat really hates about the litter box, she may avoid using it no matter how you attempt to “train” her. Problems include a box that’s too small or poorly located, and the wrong type of litter. You can solve your cat’s urination problems and get your home completely free of that nasty cat pee smell, but the solutions may not always be obvious. Instead of wasting time learning by trial and error, read the book Cat Urine Problems Eliminated to discover proven-effective ways to retrain your cat and regain your home.

Tired of wasting time learning by trial and error? Check out Cat Urine Problems Eliminated to discover proven-effective ways to remove that nasty urine, retrain your cat and regain your home.

Learn cat trivia and earn kibble for cats and dogs in need at FreeKibble.com