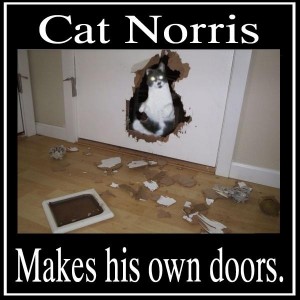 If you’ve ever cared for a baby or a dog, you’ve probably noticed the odor of their accidents isn’t nearly as strong or hard to remove as cat urine odor.

So a lot of cat caretakers are left wondering why is cat urine so strong and stubborn. It’s a good question because knowing the answer will help you understand what it takes to get rid of that pungent odor permanently.

Why Cat Urine Smells so Bad

Cats evolved to live in the dry environment of the African Savannah. Because streams and lakes are relatively rare there, cats needed to get most of their water from their food (meat) and their bodies become highly efficient at drawing out every last drop of moisture from that food.

For this reason, cat urine is particularly low in water. That means it’s a more concentrated solution of odor-causing compounds and therefore smellier and darker than most animal urine.

If you’ve spent much time around ferrets, you’ve probably noticed their pee is pretty rank, too. That’s because ferrets, like cats, are obligate carnivores who evolved to extract the water they require from their food.

Not all cats have equally stinky pee. Some of the factors that give a cat’s urine an especially strong odor can’t be helped, but others you can do something about.

Age – Cats’ kidneys lose their efficiency over time, so an older cat’s urine is likely to smell worse than that of a younger kitty.

Gender – Cats use urine as a way to mark their territory, so evolution favored the cats with the most pungent scent. Urine from male cats is even stinkier because it contains larger amounts of testosterone, proteins, and pheromones meant for marking territory and attracting the lady cats.

Diet – Feeding only dry food can cause numerous health problems in cats. One of these is dehydration because a dry food only diet is low in moisture. This makes the cat’s urine even more concentrated, so you notice the odor more. Such a diet is also low in protein and high in carbohydrates. Over time, these factors combine lead to issues such as kidney disease, urinary stones, obesity, and diabetes.

Even if you supply fresh water, cats have a low thirst drive and are unlikely to feel thirsty enough to drink the amount their body really needs. Feeding wet food is the best option, but there are ways to encourage your cat to drink more water.

Why Cat Urine Oder Sticks Around So Long

Of course, the real problem with cat urine odor isn’t that it’s so powerful, but that it seems to linger forever and be nearly impossible to get rid of. That unfortunate fact is due to the chemical composition of cat urine. Like other animal urine, cat urine has three basic components:

Uric acid – The compound that forms crystals with low solubility (they don’t readily dissolve in water) that trap odor-causing compounds.

As the cat urine sits around, bacteria set to work decomposing it. In the first stage, this process releases ammonia. In the second stage, it releases mercaptans, the same compound that gives skunk spray and natural gas their distinct sulfury smell.

Oh, but wait, it gets worse! One of the biggest odor-makers in cat urine is the pheromone felinine. When fresh, this pheromone is odorless to humans. As it breaks down, though, it turns into 3-mercapto-3-methylbutan-1-ol (MMB), the compound that gives cat urine its distinct odor.

Bacteria can easily break down urea and urochrome (if fact, you could wash those away with water), but they can’t break down the uric acid crystals. Most household cleaners can’t either. So uric acid crystals are left clinging to your carpet, floor tiles or wherever else your cat wet. They hang on to the MMB and other odor-causing compounds for literally years, so the odor lingers.

To get rid of cat urine odor permanently, you need to get break down the crystals first and then wash them away. In Cat Urine Problems Eliminated, I’ve included two recipes for homemade cleaners that will do the job as well as recommendations for effective enzymatic cleaners for especially stubborn cat pee odors.

Tired of wasting time learning by trial and error? Check out Cat Urine Problems Eliminated to discover proven-effective ways to remove that nasty urine, retrain your cat and regain your home.

Learn cat trivia and earn kibble for cats and dogs in need at FreeKibble.com